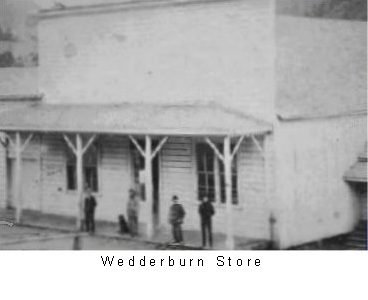 It was a calm, dog day, just after school started in 1944, when this 16 year old lad hiked down the hill from his home in Wedderburn to the Wedderburn Store. My dad, Sewell Newhouse, had an office located in the west end of the old building which had been built by Hume in 1895. When Saturday weather was good it meant we were going surveying, just like we had been doing all summer. School had not separated me from work. Especially when the weather was good and I was available. I'd been at surveying long enough to know that the first order of business was to gas up the 1938 Oldsmobile, so I backed it up to the old glass reservoir pump in front of the store and went in to tell Bud Goudy what I was going to do. He nodded his head in approval and went about his business filling out grocery orders for delivery up the Rogue River in Bob Elliot's old Rogue River mail boat. I managed to get the whole 10 gallons down the fill pipe and went back in the store and told Bud. He reached for dad's account and duly noted the purchase. Then I went into the office and into the large back room where the bulk Montgomery Ward oil was stored. The Oldsmobile always consumed a quart of oil per day unless you drove clear out of Curry County, which was seldom.

After a short discussion with dad on what was needed for the day I went on back to the ante room where Hume's old vault held everything of value, including dad's transit. We never locked the vault door, for things were only kept there for fire protection. I tried the handle and sure enough, the vault was somehow locked. We were already running late so I was uneasy about going out front and telling dad about the vault door been somehow locked, but I did. After a few words, which I didn't hear very often, he went over to his desk and rummaged around the papers until he found one of Wakeman's myrtlewood ash trays. When he turned it over it revealed the combination to the vault. He gave me the combination with instructions to open the damn vault and to get going. I had tried the combination about three or four times when he came into the room. I couldn't make the combination work. Dad tried it two or three times and had no better luck. He now seriously questioned me on what I had done the last time I put the transit away. I pleaded innocent of tampering with the combination, and that was the truth. I didn't mention trying to slam the door which never worked anyway since the vault was air tight. That settled the surveying project for the day so I was released to go home and stack wood.

After reading the Sunday funnies the next day, I was sent down to the office and told to run the combination 100 times before I took off to see my friends, or whatever else I was going to do. On Monday, after school, I rode my bike over to Wedderburn and stopped at the office to pick up one of my nickel Pepsi Colas out of the back room. My dad was there and told me that I would be trying the combination 100 times everyday until the vault opened. Gee Whiz, but I did it anyway. A week went by and the vault was still closed.

The next Saturday dad had a transit he borrowed from Louis Knapp, in Port Orford. I believe it was the only other one in Curry County. I still had to try the combination 100 times before we left for work. During the second week, my dad had a conversation at the courthouse with the County Assessor, George Sutton and the County Sheriff, R. Glenn Sabin. The subject of the locked vault came up. They both discreetly revealed that old man West of West's Mile up in red Flats was a convicted safe cracker. That appealed to my dad so he and I went to Red flats the following Sunday. In those days that trip took the better part of a day up and back. We had to drive the old highway 101 to Pistol River and then up Pistol River through the Gardner Ranch and then on to red flats. Red Flats got it's name from the clouds of fine reddish orange dust that somehow gets into a car through the tightest windows while driving by.

The West Mine was located on the West side of the old CCC road to Snow Camp. West considered himself the unofficial law enforcement officer of the area. His cabin was right out of the Old West with the deer antlers nailed to the walls and the horseshoe nailed over the door. The area contained a lot of old wrecked cars and rusty mining machinery. He was a large man even with stooped shoulders. West really looked ominous, but after a little while he became quite friendly. I think he was quite lonesome. He would say, "Well, you're number six this summer," or something like that. He listened to dad explain the problem with the vault and he agreed to help with the stipulation that he come alone and not tell anyone. On the day agreed upon we left home at 5 am and headed for Red Flats.

We had West in Wedderburn by 1 PM. It was Saturday and I found some excuse to hang around and see how a safe was cracked. West put his ear up to the vault and run the combination just once. Then he asked for a large wrench and we had plenty of them available. He adjusted the wrench to the vault door to gain additional leverage and then jerked the handle back and forth and also used a two pound hammer. It sure didn't look like a silent, dark of the night operation to me. After about five minutes of this, nothing had happened. West commented how well the vault was put together. He didn't hesitate on his next course of action. He asked where we could get a 1/2 or 3/4 inch electric drill. This was not a common article in 1944 but dad figured if anyone had one it would be at Fendrich's Garage across the river. West explained the problem. He said was simply that the set screw on one of the tumblers which determine the sequence in the combination must have worked loose over the years and just dropped out. The chance of one free wheeling tumbler lining up with the rest had unlimited odds. So much for the 100 times a day theory. He said he had tried the wrench and hammer because some times a free tumbler would bounce around and line up due to the unbalance in the tumbler where the notch was cut out. It works when the notches line up on the top and with this vault, that was not the case. I was now a case of drilling, so Fendrich was summoned. When he arrived, West did a little tapping with a claw hammer on the door and with the aid of a center punch, he picked the place to drill. Fendrich did the drilling and West kept an eye on the drill to make sure it was kept horizontal.

When Fendrich felt the drill go through the outer door he, he stopped, and asked West what to do. West probed the hole with the center punch and told Fendrich to keep drilling. In another minute or two the drill again went through something solid and Fendrich removed the drill. West wiped the door and the combination with a rag, and with a rag wrapped around the handle, he pushed it to the left and the vault door opened. The last drilling was the most crucial because the drill had to cut through the steel arm that ran from the combination over to the dogs in the main door. Once the steel arm was cut the handle could withdraw the dogs and open the door. The steel arm that was cut was 3/8ths of an inch thick which didn't leave much leeway for West and his ½ drill bit. Then, of course, West said he didn't like to drill more than one hole because it made a sloppy job when you patched it up. When he opened the combination box up there was the loose screw. West said he might as well put it back together so the screw went back in it's place. Dad didn't really care if the vault would lock or not but West was not about to do a half way job. Fendrich brought his welding equipment in and welded the combination arm back together while West poked around in the back of Fendrich's wrecker and found a broken ½ drill bit. This was trimmed off to fit the outside hole and welded back and front. West said it would be next to impossible to drill the vault again because of the hardness of the drill bit. After the reassembly was complete West shut the door and tried the combination. I was surprised because he had only seen the combination once during all of this. Everyone went their way, Fendrich back to his garage fifteen dollars richer and West back to red Flats. He didn't want any money, just a quart of Old Quaker.