Stay Away From Her, Or Else! * 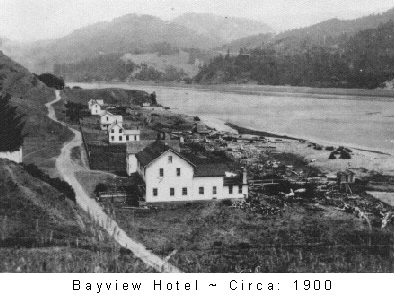 During the early part of August, 1896, H. W. Fountain, a sewing machine salesman, left Marshfield, Oregon and headed south. He arrived in Wedderburn-Gold Beach and tried to sell some sewing machines before heading on to Crescent City, California. He only intended to stay a few days but he got involved in things other than business. Grant Baxter lived in the area and he thought that May Smith was his one and only, although she apparently did not feel the same way about him. When Baxter heard that Fountain had been visiting May Smith, he got very upset. On Friday night he informed May that if Fountain came to see her again he would kill him.

The next night the trouble began. Fountain had been out to Alf Miller's house and picked up his oars to row across the river to Gold Beach. When he got near the Bayview Hotel** he met Baxter and the conversation immediately heated up. Baxter warned Fountain to stay away from May Smith, but Fountain figured it was none of Baxter's business and told him so. Fountain was armed at the time and ready for trouble if it happened.

Baxter said, "I'll see you again." Fountain went across the river, where he told several people that he had been threatened by Baxter. Baxter went into the Bayview and talked the matter over with some others there. He told them that if Fountain did not stay away from May he would do him in. He then borrowed a pistol from a fellow, telling him that he wanted to do a little target practicing. The owner took the pistol back the next morning but Baxter borrowed it again. A little while later, E. A. Bean was getting a shave from Baxter and Baxter told him of the trouble he was having with Fountain. Baxter patted his pants pocket that showed the outline of a pistol, and told Bean that he was ready for Fountain. Later on Baxter obtained some cartridges from Dave Carey. He reloaded the pistol and placed it in his front, right hand pocket. That morning he visited May Smith. Now he had the pistol tucked in the band of his trousers in front and he told her it was for Fountain. He said he was ready for Fountain and would do him in.

Just after lunch the following day, Charles Leon had Baxter cut his hair. He noticed the pistol in Baxter's pocket. He felt of the pistol and asked, jokingly, if it was for him. Baxter answered in an angry manner and Leon dropped the subject. After the hair cut was finished, Baxter and Leon left the Bayview. Leon heard some shots as he walked away, but he paid no attention to them.

J. Abraham, a peddler, had his wagon with goods for sale parked near the Bayview. He saw several men, including Fountain, standing around looking at goods. He saw Baxter come out of the hotel after cutting Leon's hair and head to the outhouse behind Alf Miller's house. Dave Frame saw Baxter in the outhouse. The pistol was laying beside him. Baxter then went to Alf Miller's residence and called on May. He asked her if Fountain had been there that day. May said, "Yes." Baxter asked her what he had been there for and May said, "To get a piece of string to tie a rag to his finger." Baxter asked if she gave it to him and she said, "No." Baxter then told May, "to go to hell." Baxter walked off. Dave Frame came along and talked to May as soon as Baxter had left, then he left, following Baxter. Baxter walked toward the crowd around the wagon. He approached Fountain from behind. Fountain, who had his back to Alf Miller's and was unaware that Baxter was behind him had a shirt on his arm, getting ready to purchase it from the peddler.

Baxter looked at Fountain for a few seconds and then, without warning, swung his arm and landed a heavy right hand blow to Fountain's neck, just below his right ear. The blow lifted Fountain off of his feet and put him on the ground, dazed, as his head had struck a railing as he went down. Baxter stood over him, looked at him for a few seconds and then seeing that he did not move, walked away, heading around to the hotel walk and onto the hotel porch. He stopped at the corner of the porch closest to where Fountain lay and watched him. Fountain was helped to his feet by Alf Miller and Dave Frame, and soon he was steadied on his feet. He asked who had struck him. They said it was Baxter. Fountain said, "That was not fair, boys." Seeing that Fountain was back on his feet, Baxter came back from the hotel and walked rapidly towards Fountain. He had one hand over the other, as if on his pistol. Fountain told him to go away, saying he did not want any trouble with him. Baxter accused Fountain of improper conduct concerning May, which Fountain denied, telling Baxter he was mistaken and again telling him to go away, that he wanted no trouble with him.

Baxter's reply was, "You're a lying SOB. I ought to stomp you into the earth. I ought to kill you as I would a rattlesnake."

Fountain again told Baxter to go away and leave him alone, that he wanted no trouble. Baxter shook his left fist in Fountain's face, hitting him several taps, and again called him names and made threats.

Fountain, who was standing alongside the railing to the walk, endeavored to step over. He was assisted by Robs Fennel who had just arrived. Baxter backed off a few steps. As Fountain came over onto the walk, and was still bracing himself by one hand on the railing, Baxter began to draw his pistol and at the same time saying, "I'm ready for you now" or "I've got you now." Baxter then pulled his pistol, which caught in his pocket for a moment. He then aimed at Fountain and pulled the trigger. The gun misfired on a bad cartridge. Fountain pulled his pistol, deliberately, as though it had also got hung up on something in his pocket. He took aim and fired at close range. His shot hit Baxter, caused him to flinch, and affected his aim. Baxter's first shot whizzed past Fountain's right ear. Fountain stood his ground and again fired, striking Baxter once more. Baxter fired back and hit Fountain on the side of the right thigh. The bullet passed just below the skin and exiting the back of the thigh. Fountain still stood his ground. Baxter backed off a little and turned sideways. The men then faced each other and fired again.

Fountain fired until his gun quit working. He then ran down the walk to the bunkalation porch of the hotel, keeping an eye out for Baxter. As Baxter watched Fountain run away, he threw his pistol down. Then he picked it back up, broke it at the breech and ejected the cartridges. He then started reloading, but quavered. Then his knees gave out and he fell backwards into the road. Fennel called out, "Baxter's killed." Baxter answered, "No I'm not." Several bystanders rushed to his side and he turned his eyes to them but he was too near death to speak. He was packed to his room in the hotel and he died a few minutes later.

Baxter had received two wounds, either one of which would have finished him. One bullet entered close to the left nipple and penetrated the lower portion of his heart. The other entered about four inches above and cut the ascending aorta of the heart. Both bullets stayed in the body.

When Fountain was having his thigh wound dressed he told his attendants that they would find two bullets in Baxter. One would be at the left nipple and the other just above. He proved to be right.

As soon as the shooting was reported, Sheriff Turner arrived from Gold Beach and placed Fountain under arrest. Alf Miller rode at once to the camp meeting at Bagnell's ferry to summon a doctor, and a messenger was sent to summon Coroner Melville, who was at his home up Hunter Creek. When Melville arrived he took charge of Baxter's body and personal effects. He set Monday afternoon as the time for the inquest and issued subpoenas for the witnesses to appear.

Among the effects found were 90 cents in the road where Baxter fell and 25 cents in his pockets. Among the effects not found was a purse containing around 20 dollars which Baxter was known to have been carrying just before the shooting. Someone obviously found that and forgot to turn it over to Coroner Melville.

The pistols were introduced at the inquest. Baxter's was a five shot self ejecting Smith and Wesson that he had borrowed from a friend. Where Baxter had ejected the shells and started to reload the gun, four empty shells and a dented cartridge were found, showing that one cartridge had indeed failed to fire. Fountain's gun was a six shot Colt revolver. In it were four shells and two indented cartridges that had failed to fire, showing that each man had fired four rounds.

The coroner's inquest was held on Monday afternoon and the jury, after being out for about two hours, rendered the following verdict.

"We, the undersigned coroner's jury, find that U. G. Baxter came to his death from a pistol shot wound at the hands of Mr. Fountain, a machine agent, and also that the killing was justifiable, according to the evidence given before the jury.
E. A. Bailey, Foreman
M. Doyle
R. Paskins
A. H. Gauntlett
H. L. Colvin
J. H. MCElhaney
Wedderburn, Ore. Aug. 17, 1896"

The coroner's verdict set Fountain free. He got Joe Bledsoe to drive him to Bandon three days later. Then he went on to Marshfield. Ulysses G. Baxter was buried in the Gold Beach Cemetery.

The talk around town was that Baxter had finally ran across the wrong man and got what he had been seeking for some time. Some others felt that the world would not have been much the loser if Baxter's gun had not misfired and the men had shared a common fate. All agreed that Fountain was justified in his actions.

*This story is based on an account of the incident published in the August 21st issue of the Gazette.