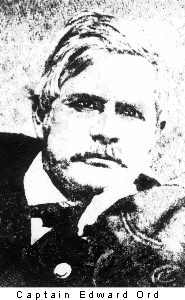 From the Diary of Captain Edward Ord

On March 26, 1856, a military unit under the command of Captain Edward Ord, left the mouth of the Rogue River to locate and destroy the "Mack-a-noo-tenay" Indian village known to be up the Rogue River.

The group consisted of the 55 men of "B" Company, 3rd Artillery, under the command of Lieutenant Drysdale and 38 men of "F" Company, 4th Infantry under the leadership of Captain Delancy Floyd Jones.

Guided by W. Walker, and following a "bridle path" through mountainous country the party reached the village the following afternoon at about 2:00 o'clock. The village was located on a river bottom. Ord's company entered the area from the East. The Indian houses stood in a row on the river side of the flat and appeared to have been recently vacated. About 100 yards north of the houses were steep slopes that were thickly wooded. To the West end of the bottom some 50 yards from the houses, was a thick growth of willows. To the East, or upper end of the bottom where Ord entered, and approximately 200 yards from the houses, were steep wooded slopes.

The Rogue River at this point was 80 to 150 yards wide and ran fast and deep. The mountains on the south shore and at the East and West end of the village came down to the water, completely enclosing the bottom and making it accessible to the mounted men only by the trail they had taken.

Ord found 8 or 10 houses on the bottom. He gave the order to burn the houses. As his men were preparing to fire the village Ord spotted some Indians coming down a high ridge across the river. Ord decided that he might be attacked while firing the village so before applying the torch he took defensive action.

First, he had Captain Jones march his men through the woods clear around the village and placed them in the willows at the West end of the bottom. He deployed them there extending from the mountains to the river.

Next, he sent all but 12 of his company into the wooded area north of the village under the command of Lt. Drysdale. Then the village was torched and the advance guard was stationed under cover of the burning houses so that they could return any fire coming from the base of the mountain across the river.

When the houses started burning Ord studied the movements of the Indians on the south bank of the Rogue about a quarter of a mile up stream. From what he saw he became convinced that the Indians were crossing the river in force so they could attack from the timbered spurs which hemmed in the village on the North and East. He could see that from the bottom the approaches to these ridges were steep and bare. Since Ord wanted to occupy the spurs ahead of the Indians time now became a factor. Ord told Captain Jones to face his company towards the bottom and double-quick East to the ridges. Jones had 300 yards to cross. The indians got there before he did. Jones immediately attacked.

Meanwhile, the 12 men that Ord had left with the blankets and provisions on the East slope, where he had entered, came under attack. The Indians had approached the guard from above and rushed down at them.

Seeing this, Ord sent Drysdale in a flanking movement to the ridges of timber North of the blankets and provisions from which the Indians were attacking the guards. Drysdale arrived at that point as the Indians were coming down the hill at a run and he was able to drive a portion of them back. Some of the Indians had already crossed the bare ground and entered a wooded knoll. Ord gathered the advanced guard and the guards driven from the provisions and drove the Indians from the knoll towards Lt. Drysdale, catching the Indians in a crossfire between the knoll and the slope. The Indians found themselves in the very position in which they had hoped to place Ord. This cost several Indians their lives.

The Indians, however, still held the ridge where Jones had driven them after two or three rushes. Ord then used the advance guard and some of "B" Company that had followed him through the wooded knoll and charged, driving the Indians out of the spur after some difficulty.

Ord called in the men. Prior to engaging the Indians the men had completed what Ord called the "...roughest days march he had ever made..." He formed the men up in good order and gathered up every animal and vehicle they had brought with them. They then left the area and headed up the mountain to a camp site some 2 1/2 miles from the village.

Ord had a difficult time urging the exhausted men along. He gave his saddle mule to his First Sergeant who was in charge of the rear guard so that the sergeant could carry a badly wounded soldier. This man and a recruit with a foot wound were the only casualties suffered by trhe soldiers.

Some of the men later made sedan chairs for the wounded and they proceeded towards camp. The march was exceedingly slow. There was no water so they walked until 1 am when they finally reached the campsite. With the difficulty encountered in carrying the wounded up steep mountains and through dense underbrush at night, and the frequent stops to remount the wounded and renew torches, it took six hours to cover the 2 1/2/ miles.

In his belated report, Ord expressed satisfaction with the performance or his men. He noted that Captain Jones, Lt. Drysdale, acting assistant surgeon C. D. Hill and the non-commissioned officers of "B" Company, 3rd Artillery and "F" Company, 4th Infantry, performed with as much promptness in carrying out his orders as the generally raw material of the party permitted. He also mentioned that it was but just to specify First Sergeant Nash, Sergeant Hamilton and Privates Muldowney and Smith of Company "B" 3rd Artillery.

Captain Ord later served as a General in the Civil War and a Fort near Monterrey, California still bears his name.