Hugo Mayer was an unnaturalized immigrant that was born in Suhl, Germany, in 1884. He came to the United States in 1904, arriving in New York and continuing on to California. He went to the Klamath River country and got a partner and the two of them came to the illinois River in 1906. They prospected along Josephine Creek and Cyon Creek and then headed down river. The trail at that time only went as far as Bald Mountain and they had to blaze trail from there to Silver and Indigo Creek.

In 1906, Hugo found a meadow and decided to homestead it. He needed some money, so he went to Crescent City and worked that winter. When he came back he found that Phillip Hancock had homesteaded the meadow while he was gone. Hugo crossed the river and homesteaded a place there. The only building on the property was an old miner's shack. He cleared the land of rocks to make a pasture and garden space. It became his home for the next 27 years.

To obtain tools, Hugo ordered from a catalogue. His order would arrive by train and he had to travel 50 miles to West Fork to pick it up. Most of his supplies he obtained from Gold Beach or Selma. The only groceries he bought were flour and coffee. He left his homestead occasionally to get money, but most of his time was spent on the Illinois.

He subsisted mostly on acorns, roots and wild game. He had a homemade pipe that he used to smoke ground-up laurel bark. He trapped and shot bear, panther, martin, mink, ringtail cat, coon, fox and skunk. His trapline ran mostly between Horse Sign Creek and Collier's Creek. The sale of his furs earned him between $40.00 and $100.00 per year. Hugo was always careful not to trap out the specie and left an area time to replenish.

Hugo had a unique system for crossing rivers. He hung a cable across over the water and hopped across on a pogo stick arrangement. The pogo stick was simply a six foot long board that hung over the cable and had a cross piece on the bottom. The operator stood on the crosspiece and hopped across the river. Hugo had three such arrangements. One to cross the Illinois to his cabin, one on Collier's Creek and one to cross a deep canyon on upper Collier Creek. He also had lean-to shelters constructed along his trap line.

Hugo was in his twenties when he went to work on the bridge across the Rogue at Agness. A fellow worker dropped a wrench and it hit hugo on the head. The injury was severe enough to result in a steel plate in his head and may have been the root of some of his problems thereafter.

Phillip Hancock sold out across the river to Robert Franz who moved in along with his wife. Hugo and Franz had a friendly relationship on the surface but as time passed Hugo became convinced that Bob Franz was intent on running him out of the country. He thought that Franz was telling lies about him and he thought that Franz had hired men to burn him out. He was afraid to leave his cabin and made only $27.00 trapping his last year on the river.

Finally Hugo could stand it no longer. He decided he would have to kill Franz. On November 13, 1934, He picked a spot along the trail and waited with his .22 rifle. 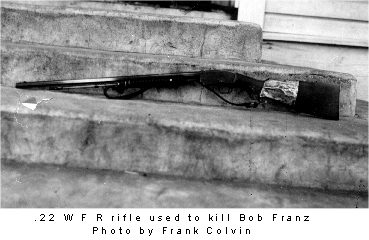 When Franz came by Hugo called for him to stop. He wanted to force Franz across the river where he would kill him and bury the body. Franz would not stop and Hugo shot him in the back. Franz fell off of his horse and lay by the trail. Hugo left him there but he also mistakenly left his homemade pipe and shell casings where he had been hiding. Hugo told the sheriff that, "When I shot him, he squealed like a pig, the dirty coward."

When Franz's horse returned home without him, Mrs. Franz started looking. She soon found his body along side the trail. Franz was taken to Gold Beach to the funeral parlor. He had been in ill health and it was assumed he had died of natural causes, but when the funeral director was preparing the body he spotted the bullet wound in Franz's back. The home made pipe and .22 casings made Hugo a suspect.

After the shooting Hugo took off to check his trap lines and was gone for three weeks while the authorities searched the adjacent hills. People started carrying guns in case "crazy Hugo" showed up. When Hugo returned to his cabin on December 5th, 1934, the police were waiting. He gave up without a struggle and told them the shooting was entirely justified. After his capture, the newspapers had a field day writing about the "old man of the mountains", "crazy Hugo" and "the hermit of the craggies". Stories circulated about the wildman who wore animal skins and walked barefooted in winter. Hugo admitted that he occasionally wore skins when he had no other clothes, and that he was once seen walking in the snow barefooted after he had put his shoes too close to the fire to dry and they had burned up.

Hugo was tried in Grants Pass and on January 17, 1935 he was found guilty of murder in the first degree. After his trial Hugo remained secure in his belief that he would be pardoned since he was convinced he had only done what had to be done and no crime was involved. He felt no ill will against anyone and told the newspapers that the judge was a fine man and that his attorney's had represented him well. He thanked Grants Pass for treating him so well and for his best Christmas ever, with so much food. He reckoned that it would be tough to go back to acorns and camas roots.

On January 19, 1935 Hugo was sentenced to the penitentiary at Salem, Oregon, for the rest of his natural life.

He was received at the state prison in Salem on January 22 and in due time became keeper of the prison's hogs.

Hugo died on June 23, 1961, after serving 26 years in prison. His remains were cremated and remained in the state vault until Heck Timeus obtained them and spread them over the Illinois River country.